Watch as this 4 month old German Shepherd puppy goes from bored and distracted to excited and engaged…over the course of 8 sessions in 4 weeks. By using the PronouncedK9 method to determine the puppy’s type, Brian Harvey is able to use the dog’s innate characteristics to achieve the desired results.

Are you having trouble getting a dog to start or engage? Look no further! PronouncedK9 can provide you the step-by-step instruction to determine the dog’s type and how to use his strengths to train him. Read more about the Four Types and then join PronouncedK9 to start putting our training methods to work for you today! You will also see all of this puppy’s training sessions, as they are happening, and follow them going forward. Plus get training tips and advice on all IPO and schutzhund phases. What are you waiting for?

Check out the level that this young dog is working at already!
PronouncedK9’s Brian Harvey is working the foundation bite work on 16 month old Hondo, owned and handled by daughter Chelsea Harvey.

Learn how you, too, can properly train the foundation on your Schutzhund and protection dogs. Join the PronouncedK9 online training club for only $25/month. Learn methods for training bite work, tracking and obedience. Join today!

If you follow any discussions on-line regarding protection dog training or bite work, we are sure you came across video of the Dakota Access Pipeline protests. This past week, video posted all over the internet showed protestors being met with ill-trained guard dogs and handlers. This incident sheds light on many of the problems that can be created by poor training practices. Here’s Brian’s take on the incident:

You can view some of the video Brian references here: http://www.democracynow.org/2016/9/6/canine_expert_decries_egregious_horrific_dog

Can an IPO dog be a protection dog? Can your protection dog compete in IPO? In this video blog, Brian Harvey shares his stance and how, with the PronouncedK9 Method, you can have both. 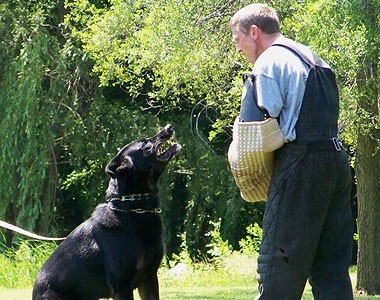 Check out these video clips of Brian and John working their dogs this past weekend.

Both dogs are trained with the PronouncedK9 Method!

The attached video is an example of Brian working a young (19 mo. old,) defensive type bitch.

Below, Brian references Jim Engel’s article “Schutzhund is Over in Europe” regarding the  removal of stick hits from the FCI IPO Championships. Brian has a few things to say on the future of schutzhund:

Although I think this article is a little on the dramatic side, I totally agree with Jim that its time for Americans to take charge of our own working dog affairs. I also believe its time to get back to the fundamentals that made Schutzhund great in the first place; testing dogs for courage and hardness, and promoting the ones that have it. As far as the stick hits go, I’ve already heard fellow Schutzhund competitors say, “Who cares? What difference does it really make, someone is still going to win.” At this rate, I too believe that the stick hits will be gone from competition in two years time.  Like the old saying goes, when you stand for nothing, you’ll fall for anything, which is really the larger issue at hand here.

In all fairness, I don’t believe that this can be blamed on the show dog community.  It probably has more to do with the outside pressures to be politically correct and our leadership’s growing concern with the public perception of what Schutzhund is. But if show and pet people are indeed determining the path of our sport, it is only because we — the working dog people — are allowing them to.  If the consensus is that show people care more about a dog’s conformation and movement than its skill and performance, then of course they’re going to welcome any rule change that makes getting a title easier.  Since the working aspect of the dog isn’t their main focus, who can blame them for that? In the three decades I’ve been involved in the sport, this hasn’t changed. Conformation people want now what they wanted back then. If anything, I think I’ve seen an increase in the working ability of show dogs over the years, which is what I would like to see working dog people continue to support.

On the other hand, however, the mentality of most Schutzhund people has changed drastically in the last thirty years.  What they want today is totally different than it used to be. Today, the number one concern of most of my working dog friends is points. That’s the main focus; how can I get another point? They are willing to abandon all the fundamentals of Schutzhund just to get a higher score. Thirty years ago, no one would have traded their real protection dog for a dog that could simply win a trial. If a dog wasn’t serious, nobody cared about the score it got anyways. But these days the score is all anyone cares about.

The point is that if we are to be the champions of the working dog, we have to take responsibility for the evolution our sport is undergoing.  Its people like us, the people who are reading these articles, that are most concerned about the direction the sport is headed in. We have the most to lose here. So why not stand up and take charge while we still have the chance?
~Brian Harvey