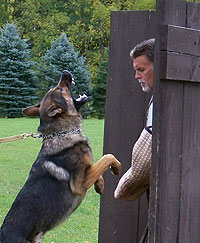 These fundamental differences must be understood in order to train each type to the full potential. One type is looking to create distance between himself and the helper, while another is looking to get closer. Most helpers prefer prey type dogs because of their inherent drive to bite movement, which makes training easy from the start. For this reason, they are often thought to be the better type. Helpers who prefer prey types are usually using prey methods of stimulation and reward. They get good responses from prey types and poor responses from defensive types, bringing them to the conclusion that prey types are best. But there are also stimulations and rewards that create good responses in defensive types, but poor responses from the prey types. Once you understand how to train each type you will see that there is no best type—just the best way to train each type.

Aggressive and Play types also have their own preferred stimulation and rewards. This program will teach our participants how to identify each dog’s type, and to use that particular type’s strengths to train him. Because we know that each type learns and reacts differently, there is a different approach to working each type. We can show new helpers how to make stable, powerful, serious dogs out of any type. By working from their natural strengths, we can create a balance of all four drives in every dog. 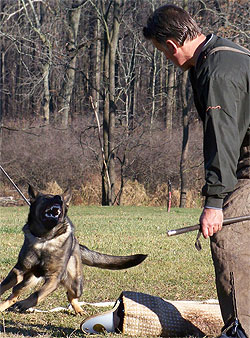 For example, think about a defensive type dog being approached by the typical prey trainer. He sees a stranger in front of him making fast, odd, side-to-side movements. These moves have no value to him.  They seem to make him uneasy and unsure of what to do. The prey trainer sees this unsureness and does everything in his power to convince the dog that he is not a threat and just wants to play a little tug-of-war.

Even though it is the opposite of the helper’s intent, these actions are very stressful to the defensive type dog. A naturally defensive dog has instincts that tell him that you are a threat. Trying to convince him otherwise will usually result in him becoming unsure. His instincts are telling him that you are bad and shouldn’t be trusted, but your actions are telling him that you are good and that he should trust you. This conflict of information makes the dog unsure about what to do, causing him stress. This stress makes him react in a less than confident way. It is much less stressful for the dog in this situation if you act in a manner that validates his natural thinking. If he thinks you are bad, be bad. If he thinks you are a threat, be a threat. By acting in the way that the dog’s instincts are telling him you should be acting, you create sureness that allows the dog to react in his most confident way.

By learning to identify each of the four types of dogs, you can understand how to best approach each one to create the desired behavior, and eventually train a well-balanced dog. Using this method, you can make the defensive dog from the example active in drive without stimulation, pursue and strike quickly, and bite full and calm, all the things prey dogs do well. Using this method, defensive dogs can be successful in the sport, and play dogs can be effective at civil street work.