Step 2: Make Energy
The next thing we need is for the dog to make energy. This energy could express itself through barking, growling, driving forward against the line or following the action from side-to-side along the perimeter. Whatever the behavior, it must be consistent and reproducible.

Step 3: Channel the Energy into a Bite
The third thing we want to see is the dog channeling this energy into a bite. This bite can be on a sack, tug or sleeve based on his age, size and level of energy he is making. Simply making the effort to take the bite should result in an instant win.

Step 4: Hold onto the Bite
The fourth thing we want is for the dog to hang on to the bite he takes. So, instead of an instant win now, we are going to cause him to hang on and then look for a good place to reward him. When he makes a positive action such as pulling, shaking or biting fuller, we will reward him by letting him have what he is biting.

Step 5: Make Carry and Show Win
Now we want the dog to start to carry. We want him to understand that commitment to the bite is the key to winning. Parading around carrying the bite object or standing still holding it intensely until he is made to let it go best displays this understanding.

Step 6: Make a Bite Happen
Now we should have the dog’s focus while holding at the end of the line, making energy, taking a bite that he holds on to until he wins, and carrying the bite object until he is made to let it go. We now want him to make the bite happen by showing an active desire, preferably barking.  Steps 1-5 have taught him to expect certain actions from us, and barking will make these actions happen.

Step 7: Chase the Bad Guy
In this step we want the dog to start leaving the perimeter he has been operating in by drawing him to us with his preferred stimulation. From about 15 to 20 feet away, have the handler let him go.  He should come freely to the bite and stay in the fight until his handler arrives. The he should be rewarded in the way that suits him best.

Step 8: Be Clear and Understand
In this step we must test the dog’s understanding by altering the picture that we show him. We must change sounds, movements, and presentations of the bite all in a way that increase the difficulty for the type we are working.  But we must remain consistent in the actions that we reward and how we reward them. Here we are looking for a dog that shows he understands what to do to create a win, even though the picture has become less inviting.

Step 9: Start Fight – Hold and Bark
At this point the dog should be actively showing a desire to bite and fight with little or no stimulation. He must now learn to go to the helper and start the fight by barking aggressively without touching until the helper moves.

Step 10: Be Confident
Here we start to test the confidence level of the dog by seeing how far we can take things. Rework the above steps again and again looking for problems or weaknesses in his understanding of what to do. The gaps that you find are key in determining what must be done to bring him to full understanding, which will make him a balanced dog. 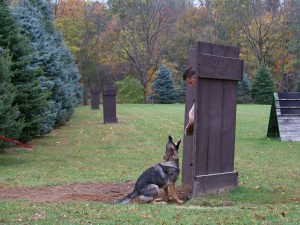 These ten things are not unique to our program. These are the tried and true basic fundamental skills every bitework dog needs to know – police, personal protection, sport, or otherwise. The ten things on this list are very important to this program, but they are not what make it different. What separates this program from the rest is the understanding of the four types of dogs. Once we understand what drives each type of dog, then we know how to train each dog to do these ten basic things.

This program will teach our participants how to identify each dog’s type, and to use that particular type’s strengths to train him to do the ten steps. Because we know that each type learns and reacts differently, there is a different approach to working each type. Even though each type follows a different path to learn the ten steps, the fact that they all know and understand how to do the same ten things starts to make them all act alike, which is the basis of this program. We can show new helpers how to make stable, powerful, serious dogs out of any type. By working from their natural strengths and training in these ten steps, we can create a balanced, fundamentally sound dog.